Today’s “Young Guns” segment features DJ Jackson, a young man who has quickly become a popular name in the Brazilian Jiu Jitsu/Submission Grappling scene. Under the guidance of Master Lloyd Irvin, this one time wrestler has become a BJJ submission specialist. Under Lloyd Irvin’s watchful eye, DJ has won some of the most prestigious titles in both Gi and No-Gi.

While his background may be in wrestling, DJ is not a one dimensional grappler… he HUNTS for submissions, which makes him one of the most exciting up and coming competitors to watch compete.

Enjoy the interview and keep your eye out for this guy in 2012!

How did you first get interested in Jiu Jitsu?
I came to Lloyd Irvin Martial arts academy to stay in shape for wrestling during the off seasons; I started jiu-jitsu to learn and try something new. Master Lloyd invited me to the advanced BJJ training seasons to help some of the guys train for a no-gi tournament they had coming up, and the experience was nothing like I have eve 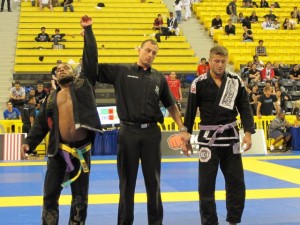 r experienced before. I immediately fell in love with it and never looked back, because I was learning something new and exciting each and every day.

It is very well known that Master Lloyd is a genius when it comes to Jiu Jitsu. Through the course of your BJJ career, what is the one most important thing that he has taught you?
With all of the amazing things that Master Lloyd has taught me it’s hard to bring it down to just one, but drilling is definitely one of them. When he taught me our Kimura system, he sat with Sijara [Eubanks] and I as we drilled it over and over again, until we could do it in our sleep. We learned that we have to drill everything 10,000 times to be able to use the techniques we learn at a high level.

You won your division at the 2011 World Pro Jiu-Jitsu Championships in Abu Dhabi, what was that like? How did you enjoy your time there off the mat?
It was amazing! Jiu-Jitsu is one of the top sports in Abu Dhabi; it’s on billboards, buses, and on national television. The fans there love Jiu-jitsu! It was a great feeling to compete in front of them. The city itself was absolutely breath taking. It was as if the streets are literally paved in gold.

We interviewed a few young World Pro Jiu-Jitsu competitors and they all say that they had the opportunity to train with a lot of the superstars of BJJ when they were there; did you get a chance to train with some? If so, who was your favorite and what did you learn from them?
I would have to say [Marcus Almeida] “Buchecha” and Guillerme [Mendes] were my favorites. I had great training with both of them, and they were very open to helping me. I learned a half guard sweep and a 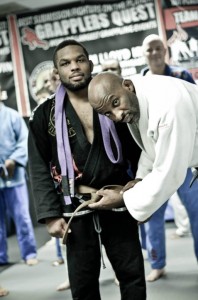 50/50 escape from Guillerme, and I had a couple of great rounds sparring with Buchecha.

Team Lloyd Irvin has a huge stable of awesome competitors, whom do you train with the most and who are your main influences?
I train with JT Torres, Jimmy Harbinson, Keenan Cornelious, and Andris Brunovskis a lot. But I’m influenced most by one of our Black belts Master Donnie. He runs our children program with Master Lloyd helping lead them to be the #1 youth team in America right now. We watch a lot of Jiu-jitsu at our house and he does a lot to help me with my game and help me close all my holes.

How would you describe your style?
I would describe my style as a takedown savant, with relentless guard passing, and a monster Kimura attack. 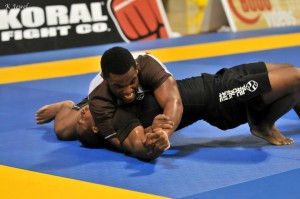 harder to make sure it doesn’t happen again. I watch my film with Master Lloyd to see my mistakes, I drill to make sure I don’t make the same mistakes and I train extremely hard to make sure that I am as prepared as possible for each and every fight.

What can we expect from you in the future?
A black belt world title! That is all that matters and I will not be satisfied until I am a black belt world champion. After that, I’m joining my teammates Mike Easton, Brandon Vera, Dominick Cruz, and Phil Davis.

Thank you for the great interview DJ!