Before They Were Stars: Renzo Gracie

Come on guys… do we really need to write anything about Renzo Gracie? He is the most charismatic member of the Gracie family. Win or lose, this lion of the sport is not afraid of anyone, I think when he is 90 years old, he will still want to fight someone in their 20’s.

Below is partial a transpiration of an interview he gave to The Fightworks Podcast where he calls out some of his family members for being inaccurate about “pure Jiu Jitsu”. If you want to hear the whole interview, you can download it here (http://www.thefightworkspodcast.com/podcasts/fightworkspodcastepisode190.mp3)

Courtesy of The FightWorks Podcast:

Renzo, we brought you on because there are probably some opinions you have about our conversation with Relson last week.

Yes, yes. Relson is a great guy, I love that guy.

Do you want to start, or would you like some examples?

Could you bring that up, because I didn’t have a chance to read the whole thing yet?

One of the things that Relson said, that I think some people might find interesting, or maybe controversial, was that – and this is not an exact quote – “Roger Gracie is the only person in Gracie Barra who uses pure Gracie Jiu Jitsu.” I think he is talking about his style of attack with the closed guard, and that sort of thing. Does that help?

Does that make sense to me, is that what you ask? [laughs]

No, it does not. Now it’s funny, now that you mention, I had a very strange experience this past week. One of my students, he actually went to California, and he ask me where he should train. I say, “the Gracie Academy,” because that was the closest place to where he was going. I sent him to Rorion’s Academy, the one in Torrance. He goes in, and they told him that he shouldn’t train there, because that place was the “real jiu jitsu place.” It was like they were saying he doesn’t know jiu jitsu, and is learning from a source that doesn’t know how to teach.

You know what happened, my friend: I see a lot of people now, especially my family, saying that. “Oh, I know the real jiu jitsu, you don’t know the real jiu jitsu.” We all learn from the same place, we all develop the same art together, growing up. But for some reason, once they jump in a plane and they move to America they try to sell a product, like the American people are a bunch of fools. Right now, I became American, and I know there are no fools here.

Do they pay for good service? They do. So if you feed them the real technique, if you give 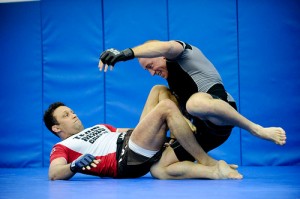 them the real sport, and everything like a good product, they will buy it and they don’t care about the price. But don’t try to ******** them and expect them to accept anything you try to shove down their throat, because this is not the greatest country in the world for no reason. In reality, I see this crap today, “this is the real jiu jitsu”…let me be honest, I see jiu jitsu now turning into Krav Maga. Turn into kung fu! Like they are selling things that will chop your head in half, with a karate chop.

You know, it’s become a joke. Let me tell you what the real jiu jitsu is: the real jiu jitsu is the one that doesn’t back away from a challenge. It goes at the obstacle and defends its flag. It’s like, if you want to claim that you have the best fighting style, you should be in the UFC kicking some ass. That’s where the best competition is.

So when people call me, saying “this is the real jiu jitsu,” the next thing they are going to say is “I cannot use it, because I could kill you!” [laughs] You know, that’s what I heard my whole life, from those fake martial artists who claim they were better than everybody else. So believe it my friend, I live my whole life watching this and seeing this. We were always against that, and now suddenly one branch of my family is turning into that! It’s claiming that, but doesn’t go on the proving ground to prove it, does not step into the place where he should actually be representing jiu jitsu, to do it.

I think [laughs] the observation that you made about people claiming their jiu jitsu is the purest, or ‘the’ jiu jitsu, but not coming to demonstrate that against other jiu jitsu, is the important point.

Yes! You have to understand one thing. The champions have the right to talk. The losers have to shut up. If you lost, you should shut your mouth off and walk away. So I don’t see no champions talking [laughs]. That’s the reality. People are selling a product, they become the king of the internet.

The ‘pure jiu jitsu’, it’s doing nothing but selling products on the internet. Again, trying to shove crap in American peoples’ mouths. This is just claiming: go and prove it with acts, my friend! The jiu jitsu was good when nobody else knew any jiu jitsu. Now, everybody knows, so now, only those who are really good shine. If you realize Gracie Barra produce more champions than anybody else, go to the world championship and try to fight in there.

You see, I am one of the guys who have the best game, believe it. If I wanna go compete on the championship level, I would have to dedicate like three or four years of my life to be on the level, of the sharpness, of those kids who are fighting in there. So I cannot question the level, the champions that they are: they are! If you win the world championship, you are legit. Nobody can question that.

Anybody questioning that, it’s because they’re afraid to step in there.

One thing I feel sorry about, is Rorion’s kids. They are very good kids, but their father feeds them nonsense. So, they could be unbelievable fighters, but they are going to end up as mediocre fighters, mediocre people. They are going to go through life as great businessmen. If I was them, I’d be selling self-help books, that’s what they should be doing. There is more money in that, instead of claiming that they are real fighters.

They are far from being real fighters. Far. Believe me. When they created a competition, when my cousin Rorion created a competition and created the rules, so his kids could win, and then tells that his kid is going to win, they couldn’t even win that. Not even the pure jiu jitsu rule that he claims he created, which was nonsense rules. Next thing I see, his kids could win nothing. They were losing to guys on the second tier, like Marc Laimon, he was beating them up. Guys who could not even feature in a world championship! People who could never compete in an Abu Dhabi and do well!

This, you know, it is talk. I don’t like to talk, especially because I do have a sharp tongue, and I’m going to strike everybody who makes no sense to me. Relson is a guy that I love, you have to understand. If he needs a roof tomorrow, he has a place in my house. Exactly like I did with his son, his son was here training with me for a long time, he’s a great kid. 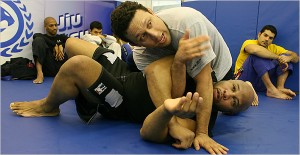 Extremely good heart, very strong mind, could be an unbelievable champion, but he needs the environment for training: that’s the environment I create here in New York. A lot of champions come out of my academy. It’s not without a reason, we train for that, and the same thing at Gracie Barra. So, you can’t question that.

To be honest, if I today was Rorion, I would sign up my kids at Gracie Barra. I would put his kids to train there, so they could reach the top of their potential. Right now, they’re in an environment where they will be nobody, they’re going to be nobody for the rest of their life. Let me tell you one thing, I do believe in a spiritual world, and when you are born with the Gracie name, you have an obligation. You have to fight, you have to teach, and you have to influence people in the right direction.