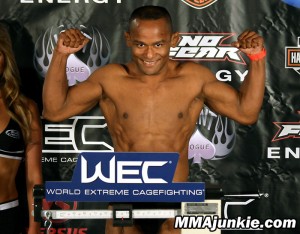 Saying that Fredson Paixao is dedicated would be a tragic understatement. Winning the BJJ World Championships 4 times (an amazing 3 at Black Belt), winning the Brazilian National Championships a total of 9 times, Fredson has secured his place as one of the legends of the sport of Brazilian Jiu Jitsu – in addition to being a top tier UFC fighter.

For these reasons and more, Fredson seemed like a good guy to talk to when it comes to understanding how to get the most of out of training time.

Luckily I was able to catch up with him on a Sunday, which is his day to read books, relax, and rest.

We quickly got to talking about how he started his training, the amount of time he spends on the mat, and the specific ways in which he trains.

Fredson does something interesting when it comes to drilling: He drills and handful of moves from every single position – and he aims to do this each and every time he trains.

“I drill top and bottom guard, mount, back mount… everything.”

This is different from the vast majority of the athletes I interview – including other world champions and upper-echelon grapplers and MMA fighters.

When you break it down, that’s a whole lot of drilling. 4-6 techniques from top and bottom guard, half guard, side mount, turtle guard, mount, and back mount ends up being somewhere around 60 reps – but assuming Fredson hits each technique a number of times – this ends up being a much larger number.

Because most MMA or BJJ classes do not cover every position in every practice, it seems to make a lot of sense to take the Fredson approach seriously in order to stay sharp in one’s entire game – despite the focused, specific content of regular training.

When I asked Fredson what he does that other aspiring combat athletes should do – his biggest recommendation was (not surprisingly) to train as much as possible – even using family and friends to practice moves on when you have to! One must, however, have a rest day – and Fredson chooses Sunday to be his day of peace and recovery.??(Science of Skill does not recommend that you choke or sweep family members in or around your house…)

In terms of food for thought, those drilling habits and pretty significant – its making me re-think a lot about the way I drill.

One Response to Fredson Paixao’s Advice On Well Rounded Drilling