The Bullshido website is home to martial artists of all persuasions, dedicated to investigating and exposing martial arts frauds.  I’ve been privileged to help with two of these investigations here in Austin and through them have become acquainted with lots of the folks on the Bullshido forums.

Bullshido members routinely organize throwdowns, nondenominational sparring sessions mostly of a regional nature.  Annually there’s a “mega” throwdown and this year we had it here in central Texas.  I hosted two awesome judoka from Lafayette, Louisiana (and their lovely wives) plus a jitsuka who has trained with us before from Waco… and what a fun Labor Day weekend it was.

Seeing people of different martial arts backgrounds get together and exchange techniques in a friendly (yet still trash-talking) noncompetitive (yet still evaluative) forum like this is really satisfying.  Cathy Chapaty, head of Austin’s Tao of Texas, hosted the first day of the Throwdown with grace and a welcoming spirit.  About 25 people from different disciplines landed on her mats at noon on Saturday and immediately started grappling.

We had people from other states and a few guys came all the way from California to join in.  The atmosphere was really enjoyable because of the respect everyone showed to each other.  Some of the styles represented include Enshin karate, judo, Brazilian jiu jitsu, muay thai, submission grappling, TKD, kali, and kickboxing. 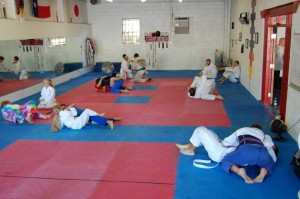 Later in the afternoon people shifted to striking and kicking. Here’s Kyle, from Waco, and Chris (red and black rashie) going at it. Chris made the 4000 mile drive from California to be with us.

In between sparring matches, several of the blackbelts in the room shared techniques with an appreciative audience.  I especially enjoyed Cajun black belt Josh Artigue’s judo lessons.  Josh spent significant time with us on Saturday and Sunday teaching some beautiful throws, footsweeps, gripfighting, and groundwork.  Here’s Coach Josh and his protege, brown belt Scott Sonnier, showing us how it’s done. 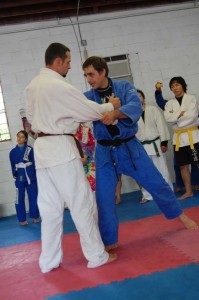 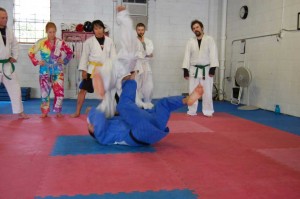 Best of all, it was not ippon-oriented but ‘throwing for control,’ thus very useful for me as a jiu jitsu fighter.

Mike MacDonald, former pro fighter with black belts in Kung-fu, Sambo, Judo, Taekwondo, and American Jiu Jitsu taught some gorgeous nogi takedowns and submissions.  He also made the long drive from Cali to be with us. 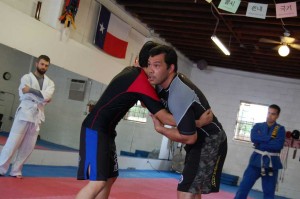 Part of the plus for me was seeing the younger generation participating too, in a family-friendly environment.  I got to roll with 3 young women, ages 8-15, and we had a blast learning from each other and watching others spar. 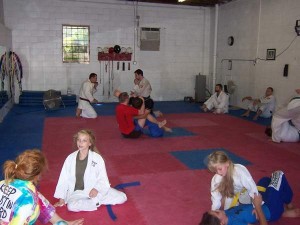 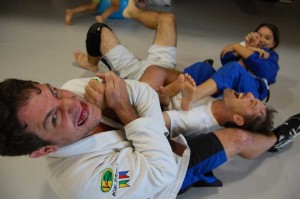 Saturday night we all hit Korea House for their amazing barbeque (and lackluster service by an aging Korean Elvis.)  We reunited in San Marcos the next day at Solidarity MMA, hosted by Taylor, for more beatdown.

More how-to-feet-to-the-ceiling was to be had, courtesy of Coach Josh and Scott… 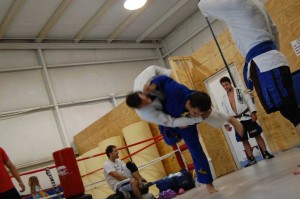 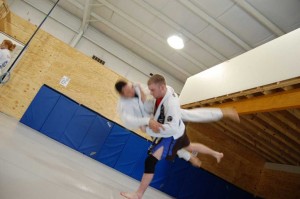 After all the sparring anyone could handle, the group converged on the river for some “spar-b-q”, tubing, and cold beverages. 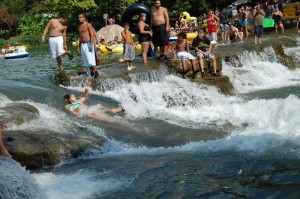 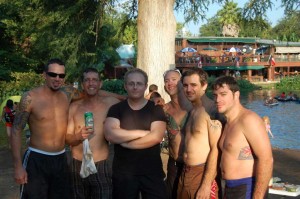 Note: a special thank you to Demitri Pevzner of San Antonio for taking most of these pictures.. a couple were taken by other Bullshido members and pinched by me, with their consent, from the Bullshido thread.

About the author:  Georgette Oden is a 3 stripe blue belt under Phil Cardella and Relson Gracie, training at Relson Gracie Austin.  You can read her blog at georgetteoden.blogspot.com.