On every Jiu Jitsu forum I’ve been on, once every other month (or so) a thread pops up with “how many gis do you have?” People (myself, unfortunately, included) boast about having 8, 10, and 12 gis. Twelve gis? Really? I train hours and hours a week, but let’s be honest. I probably don’t need more than four gis, much less 12. 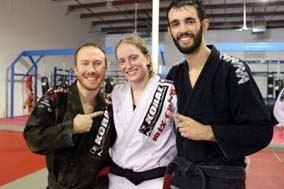 Hillary Williams with her coaches.

One of the greatest experiences I had on my last Brazil trip was the seminar I taught at a projeto social (community service) gym. We didn’t have great mats to roll on, some of the students didn’t have gis, and we weren’t even indoors–but it was probably my favorite seminar I’ve taught so far. The students were so enthralled that I came out there just to teach them, and I’ve never felt like Jiu Jitsu was appreciated as much as it was with those students. For the few hours we were on the mats, no one cared about time, money, problems at home, or anything else. We just did Jiu Jitsu until it was too dark to see.

I was talking to Finfou (Alan do Nascimento) about his projeto in Brazil, in the Cantagalo slum. I met a few students back and forth through Checkmat in Copacabana, but the majority stay in Cantagalo. He told me the students are so dedicated, so hungry to learn, but so many don’t train because they don’t even have gis.

That’s where you come in. I’m not asking you to buy a new gi and ship it out, I’m not asking you to donate your Shoyoroll #7, I’m just asking you to reach out. We all have a “starter gi,” and you know what I’m talking about. That gi you used as a white belt and developed a different fashion taste, that gi that shrunk too much in the dryer or the gi that just didn’t fit you right, the gi your son grew out of when he turned eight. If you can’t donate a gi (understandable), PLEASE talk to your gym, the parents of the kid’s programs, or someone you know who might. To you, it means so little. To someone in the projeto, it could mean so much.

I need adult and kid gis, hand-me-downs in good condition are absolutely great. My goal is 30-50 gis, and I plan to take them to Brazil with me the next time I go down. If the deal breaker is having to pay the shipping to my gym, well, I’ll pay! As well, I hope by now I’ve earned a reputation of not being someone who would turn around and sell your gis.

I realize this is just one of many projetos, and I realize the task is too grand to be able to get a gi to everyone who is needing them. I hope to help as many as I can and encourage others to do so. Every single person makes a difference. Every single gi will make the life of someone better.

We write daily about how much Jiu Jitsu has given to us, shouldn’t we try to give back?
Anyone wishing to ship gis (please talk to the kid’s class to see if parents have any of their kids’ old gis!!!), please send to

The donations button is now up and running! We’re up to 48 adult gis
and three children’s gis so far, which is actually surprisingly good
news. I made a few calls and found someone who would be willing to
at-cost make me children’s gis and he’s already down in Brazil so no
worries on getting them down there. Adult gis are much more expensive
to make (the materials must be much tougher, not only much bigger) so
he wouldn’t have been able to at-cost those for me. The donations will
go toward as many children’s gis as we can afford, and then they will
be distributed through as many projetos as we can help.

I know there were concerns about 1) shipping and 2) maintenance of the
gis, and I assure you I’ve thought long an hard about it. The gis will
go down periodically as piggy-back luggage with fighters. Constantly I
have friends coming up to compete for a week and they only bring one
of their two allotted international bags, and the other will now go
down as a Projeto Cantagalo bag. I get free domestic bags with
American so I’ll be able to transport them with me. The first set will
go down with the Mundial Nogi, followed by a few that are coming up
for seminars, and will continue from there. It won’t be one huge
shipment all at once, but at least it will get the gis down there for
free so paypal money will go directly to gis.

Second concern was maintenance. Several people were concerned how well
these were going to be taken care of. The projetos themselves will
maintain control of the gis, including washing and care, so they can
ensure that only active students are using them.

Thanks everyone for the help and spread the word!