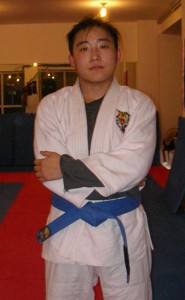 Brazilian Jiu Jitsu is a comparatively young sport, spreading around the world at a quick clip thanks to the popularity of Mixed Martial Arts events like the Ultimate Fighting Championship.  As Brazilian Jiu Jitsu reaches farther from its homeland, we can record numerous firsts in the sport like dominoes falling, especially when it comes to female competitors.  This list, courtesy of Hillary Williams on the NHB Gear forum and JSho on Sherdog, documents some of the first female black belts around the world.

Other countries, where Brazilian Jiu Jitsu is younger, offer us the opportunity to note even earlier promotions.  China, for example, is experiencing a surge in the popularity of Brazilian Jiu Jitsu and China’s first female blue belt recently took time to discuss her love of the sport with Georgette Oden for Submission Control.

Georgette Oden: Hi, thank you for doing this interview for Submission Control.  What’s your name and how old are you?

GO: Are you married?

GO: What part of China are you from?

GO: Who is your instructor in Brazilian Jiu Jitsu, and what school are they affiliated with?

AX: My instructor is Chat Quint, he from USA, he is a black belt.  [Ed. Note: Chat Quint was China’s first Brazilian Jiu Jitsu black belt].

GO: How long have you been training in Brazilian Jiu Jitsu, and do you practice any other martial arts?

AX: I am freelance and has been practice both Jiu Jitsu and Muay Thai for 4 years. I started practicing Jiu Jitsu in 2006.

GO: How many male students are there at your school and how many women — how many upper belts?

AX: There are more than 50 male students, a brown belt and two purple belts, more than 10 Blue belts, around 10 female students at the school.

GO: Tell us about how others view your training — is it common for women in China to be involved in combat sports?  What kind of reactions do you get from family, friends, men?  How do other women view it?

AX: In China, very few women practicing Jiu Jitsu, not a lot of people know this sport, a lot of male students [are] mainly foreign students in Jiu Jitsu schools. Chinese students only make up 10% -20% of whole school, less female students.  Because I [have been] training to fight for many years, my family and friends have been very supportive and understanding, many of [my] female friends have been introduced to practice [of] Jiu Jitsu.

GO: What do you enjoy most about Brazilian Jiu Jitsu?

AX: I like Jiu Jitsu because it is not to win with power, but technical.

GO: How often do you train?

GO: What is an average class length? Do you do a warm-up?  How many techniques?  How long is open mat?

GO: I understand you are the first female to achieve the rank of blue belt in China — is this so?  How do you feel about this accomplishment?

AX: I got the blue belt in October 2007, and I was the first blue belt female in China. I was very excited and it happened suddenly, I could not believe it.

GO: Where do you see your Jiu Jitsu practice in 2 years?

AX: In the next 2-3 years I want to get purple belt, but I want to participate in several official Jiu Jistu competitions before that.

GO: Thanks for doing this interview, Aihui!  I hope you understand how important you are to the future of Brazilian Jiu Jitsu for women in China and in other countries… you are a pioneer!  Keep up the good work!

About the author:  Georgette Oden, the “Red Menace,” is a 3-stripe blue belt under Phil Cardella and Relson Gracie in Austin Texas.  She trains seven days a week and drives her husband nuts.  You can find her blogging about Jiu Jitsu and life in general at georgetteoden.blogspot.com.