← Monday’s Match of the Week: Calazans vs. Estima
Video: Mike Wacker Shows Submissions From the Back →

The Rebirth of a Virtuoso: Terere in the UK

THE RE-BIRTH OF A VIRTUOSO: Terere in the UK
By Brian Davies
Edited By: Laurel Ugenti

The chatter came and went across Facebook like a screaming meteor as phrases like “He is here!” and “He has landed!” set pages ablaze.  Onlookers may have thought this was code for war but, no, this was code for a warrior.   The “Circle of Trust” was spreading the word that one of the greatest Brazilian Jiu Jitsu fighters of all time had arrived on the Island, one Fernado Augusto da Silva, or to his legions of fans simply called “Terere”.

Ever since fighter Andre Galvao was denied entry by customs, a small group of Brazilian Jiu Jitsu practitioners known as the “Circle of Trust” was established.  The main objective of this newly formed union was to ensure that every last piece of paperwork was in order so Terere could enter the country without difficulty. 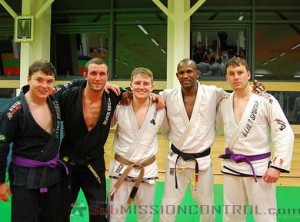 Terere at Institute of Sports Dojo in Cardiff

Although it took a few months for the “Circle of Trust” to get him here, it took only minutes for one simple message on Facebook to send British Brazilian Jiu Jitsu practitioners into orbit. After a long and arduous wait, all that was left was for fighter and “Circle of Trust” insider Sasha Hook to pick Terere, and his former student Pedro Bessa, up from the airport.

More than just a student, it was Pedro Bessa who triumphantly spearheaded the fund raising efforts to help Terere overcome his drug addiction.   Now, thanks to Bessa and his loyal supporters, Terere is back in action and welcomed by his UK fans.

When Terere finally walked onto the mat at the Institute of Sports Dojo in Cardiff (the home of the Welsh Judo team and Pedro Bessa Cardiff), the volume of applause was more than thunderous. With such a grand welcoming from his followers, Terere instantly appeared to regain the energy and charm for which he was aptly nicknamed.

The class of over seventy-five students began with a gentle run around the dojo followed by Terere’s daily preparatory drill. As he performed each exercise, you could see his improved fitness, agility and speed — the same attributes that you would see in his epic battles of the past. 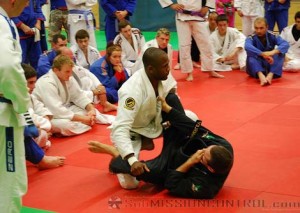 After warm-ups, he continued with a spectacular pass guard.  Learning to pass guard from Terere was like learning to golf from Tiger Woods, play guitar from Eddie Van Halen or box from Muhammed Ali. Terere’s attention to details was phenomenal.  He took the time to slowly demonstrate his techniques from every angle, breaking them down into small pieces that every student could follow. Like a true master, his objective was to share his knowledge without grandstanding.

I have been lucky enough to see and meet great champions in Brazilian Jiu Jitsu but there is something special about Terere.  As a teacher, he makes everything look easy, but when you try to mimic his movements, you feel like you’re still trying to make a wheel out of a square. There really is nothing quite like seeing The Great One in full flight — it was majestic.

After the instructional portion of the seminar, Terere graciously rolled with everyone on the mat. I watched as he took on belt after belt with the same vigor that made him a champion years ago. Each fighter was happy to be living a dream they thought they would never come true – the dream of battling a true master.  The awakening was bittersweet, however, when in a matter of minutes one by one all fell to this Brazilian Jiu Jitsu virtuoso. 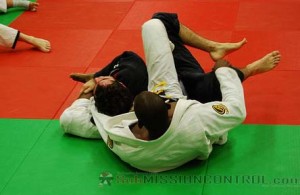 Terere finishing with a choke from the back.

Many imagined that Terere would never be able to fight so brilliantly again after his incredible struggles.  We were all shown that he is not only a master in the art, but also in life with such a remarkable comeback.  At the close of the session, all of the attending students were overjoyed to learn that they would have the opportunity to learn from Terere again in future classes.

Terere has now settled in the UK and can be found each morning running and training on the playing field. His workout alone would probably make an Olympian cry from exhaustion.  You can see the old Terere slowly getting fitter, better and stronger.   He has made additional appearances across the UK and will remain for a little longer until making his way to Poland and Europe.  After his tour, it is hoped that Terere will return to the UK to continue teaching while training for his long-term goal to compete in the European Open.

Additional updates on Terere will be available on SubmissionControl.com in the coming months.