← Monday’s Match of the Week: Maia vs. Jacare
Rafael Mendes – Why He Wins →

We at SubmissionControl are honored  to receive such a gift from a solid and upstanding individual in the BJJ community. This individual is Michael “Patolino” Piccolomini. Patolino’s resume speaks for itself. His experiences and knowledge in Brazilian Jiu-Jitsu and Martial Arts in general are admired by many high level practitioners throughout the country.

Mr. Piccolomini is a Black Belt in Brazilian Jiu-Jitsu under Matt and Nick Serra in Long Island, New York where he is the chief instructor and coordinator for all of the children’s classes. Michael also serves as one of the head instructors for both the ‘beginner’ and ‘advanced’ programs at the academy. Along with 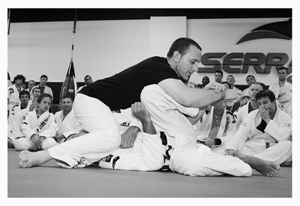 Patolino Teaching A Toe Hold At A Seminar

Patolino has written us an exclusive article on the art of teaching children. We hope to have some more exclusive content put out by Michael in the future. If you’d like to contact Mike, you can reach him via email at: karatemike3@aol.com.

There isn’t too much information out there on ‘how’ or ‘what’ to teach children when it comes to Brazilian Jiu -Jitsu.  Many people who teach children BJJ will teach them as if they were adults, or do little if any jiu-jitsu with them. That’s not the way.

Children learn best when they are having fun, and as an adult instructor, you will enjoy teaching your class if the children are having fun.  Sounds like a simple formula? It is when you have a well organized plan!

An instructor of children has to analyze the children in their class environment and give them what is important.  The techniques are not necessarily what are most important for children.  During an adult introductory class, the perspective student is given a taste of BJJ technique.  That person may learn an armbar from the guard, among other techniques. Most children starting BJJ will not have the coordination, strength, or concentration to perform such a technique.  Children need to be taught all of these components, just as you would teach them a physical technique.

I found that 45-60 minutes is a good amount of time to keep the children engaged throughout the class. I have two separate kid’s jiu-jitsu classes. My younger class is made up of children ages 6-11yrs old and the older class has children from ages 12-14yrs old. Classes are 45 minutes 3 times a week. The schedule can be run more or less frequent and the duration can be longer depending on the mat time available in your school.

I break the classes into three 15-20 minute sections. I organize the class in the beginning and at the end of each session, much like a traditional martial arts class: line the students up in rank order, bow in, make any important announcements, and give a brief overview of the day’s class.

The second section is the meat of the class. This is where I go over technique. Remember, the techniques can be positional, self-defense, takedowns or even striking. To keep yourself from getting frustrated, remember:  K.I.S.S. (Keep It Simple Stupid)! Children learn differently than adults, so you have to teach them differently than adults. Techniques can be taken out of context because of the nature of the way children train. Generally, you don’t have to take too much time to show set-ups for moves, but rather the move itself.

The third section of the class is the actual training. This is where it all comes together. Training can consist of positional training, such as escaping mount, guard passing, etc. For the younger class, they need to learn how to train. So we train something similar to back-to-back randori in judo. They learn to grip and go for a pin. No submissions!!!

As I stated earlier, I end the class by lining the children up, which helps bring closure to the day’s lesson, congratulating them on what they accomplished that day and to make any important announcements.

As an instructor, you will probably need help for a growing class. Recruit guys from the adult class. If you are able to get a few different adults to rotate through your kid’s class, you won’t put any pressure on anyone to commit their time. If someone has their child enrolled in your kids class and he or she trains, ask them to help out. The more warm bodies you have, the better!  Your assistants do not have to be high ranked guys; they just have to have a little jiu-jitsu knowledge and a willingness to help!

You can train with Mike at: